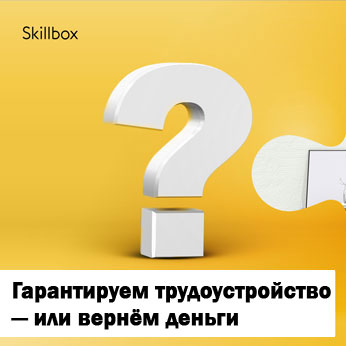 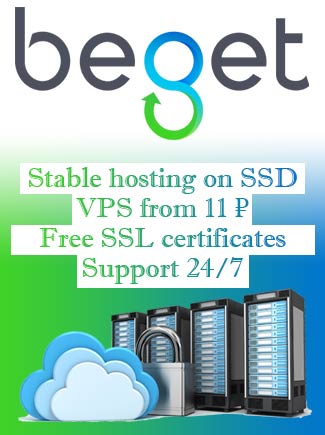 ArtCAM (PRO 2018) is one of the best professional programs for creating models for CNC milling machines. Import-export in ArtCAM allows you to open, edit and save files in different formats. Despite the apparent complexity of the program, it is easy to learn and with a little practice allows even beginners to prepare models for the machine.

ArtCAM also uses its own file format, has a built-in library (usually downloaded separately as an update package) of models and vectors. All models created directly in the program can be saved in this library, which will then allow them to be used in other projects, as well as edited (resized in XYZ, deformed in XY, copied, duplicated).

Everything is based on my own experience, more than 400 hours of work in the program allowed me to understand quite well the intricacies of vectors and create new models​.

The most current versions of the program are ArtCAM 2008 and ArtCAM 2018, the transitional versions of 2010 and 2012 somehow did not take root among DIYers and professional users (I judge by the amount of content on the Internet, although I could be wrong).

It is worth knowing that ArtCAM 2018 saves the model in an ArtCAM relief file (*.rlf extension), while ArtCAM 2008 (in versions 2008-2013) saves the model in *.rlf relief format. art. An earlier version of the program uses a hardware security key, so you won't be able to open *. art in ArtCAM 2018. You should take this into account when saving models and when moving to a new version of the program.

When working in the program for a long time, a large library of its files in the program may accumulate. If you decide to move from the old program to the new one, you need to convert the library to the new format. There are two options here:

Of course, you will need to install additional programs, but that's another matter.

(I tried to work in 2008, 2010, 2015 programs, but these compatibility problems, as well as new technologies, prompted me to master the new ArtCAM 2018 program, so work in this program will be considered further).

Import-export of STL model in ArtCAM 2018

The most relevant file format for creating models in ArtCAM is STL. The program also understands and opens OBJ files. Now let's look at import and export, as well as creating STL files and saving them.

(Importing and exporting in OBJ format is the same).

At a minimum, you need to create a new model (empty) in the program.

When starting the program, we are greeted by a window offering to create a new model. 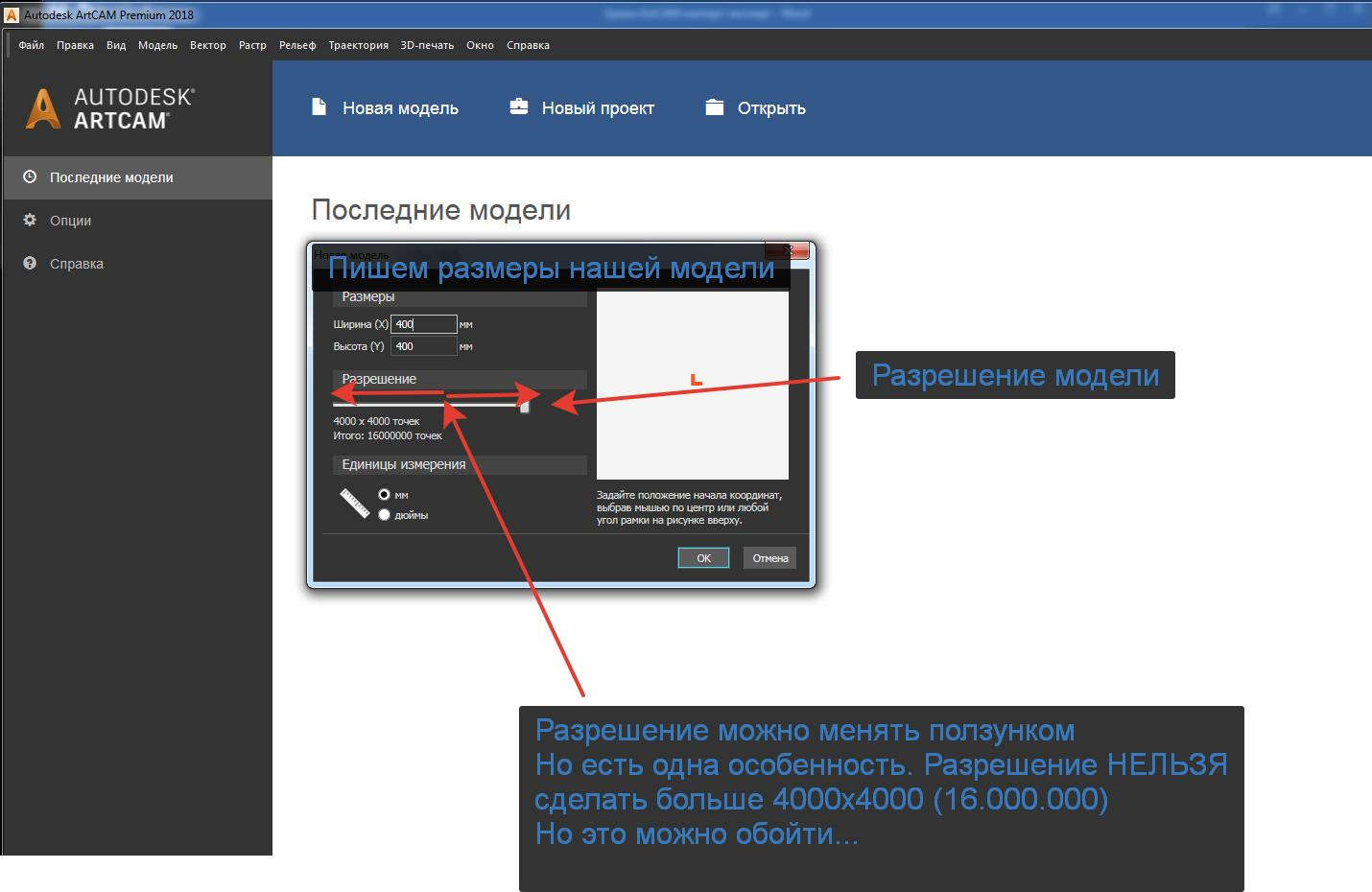 We write the dimensions of the model, select the resolution of the model. Here it is worth stopping in more detail. That is, when creating a model of 20x30 mm, or a model of 1000x1000 the maximum resolution will always be no more than 4000x4000 pixels - this is a limitation of the program (in a separate lesson I will tell you how this limitation can be bypassed and raised resolution up to 10000x10000 or more).

Therefore, if you are working with a small model, you need to create initially within similar limits, without a large margin. That is, if the future model (imported or taken from the library) has a size of 200x300, then you need to create a new model that is close in size (of course, if you do not plan to increase it).

So, the model has been created - in fact it is an empty blank, let's now import the STL model or the model from the built-in library.

Select the STL file, wait for the download - then we prescribe the required dimensions, unchecking the checkboxes, you can change the dimensions along the axes separately. You can also (and if necessary) rotate the model. We place it in the center, or as necessary during the project. 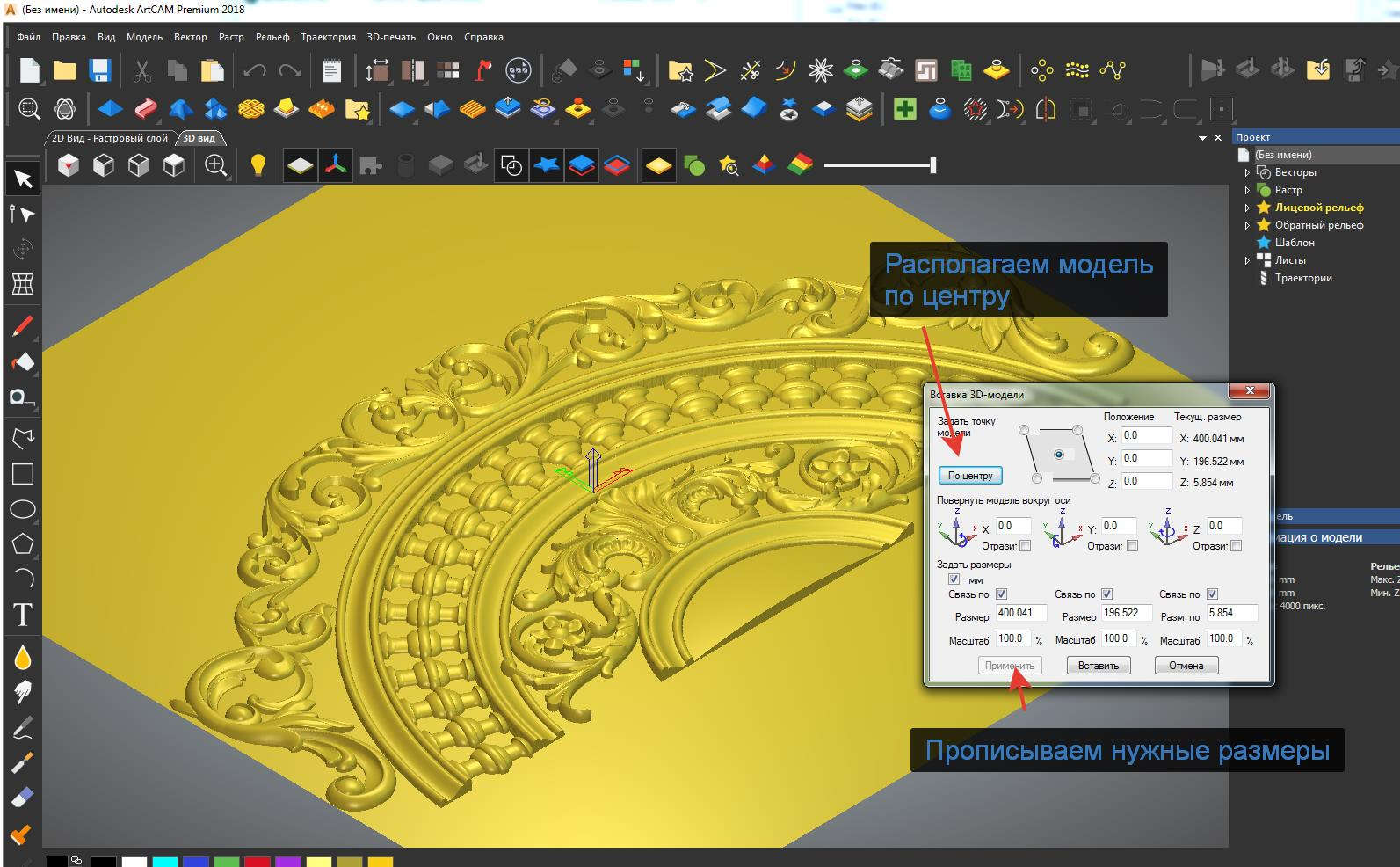 So, the model is loaded, now it is available for editing (will be in other lessons) - but now let's look at exporting the model to the ArtCAM relief library, and back to STL.

Save the model to the ArtCAM relief library

So, to save the current relief as a separate file in the relief library: 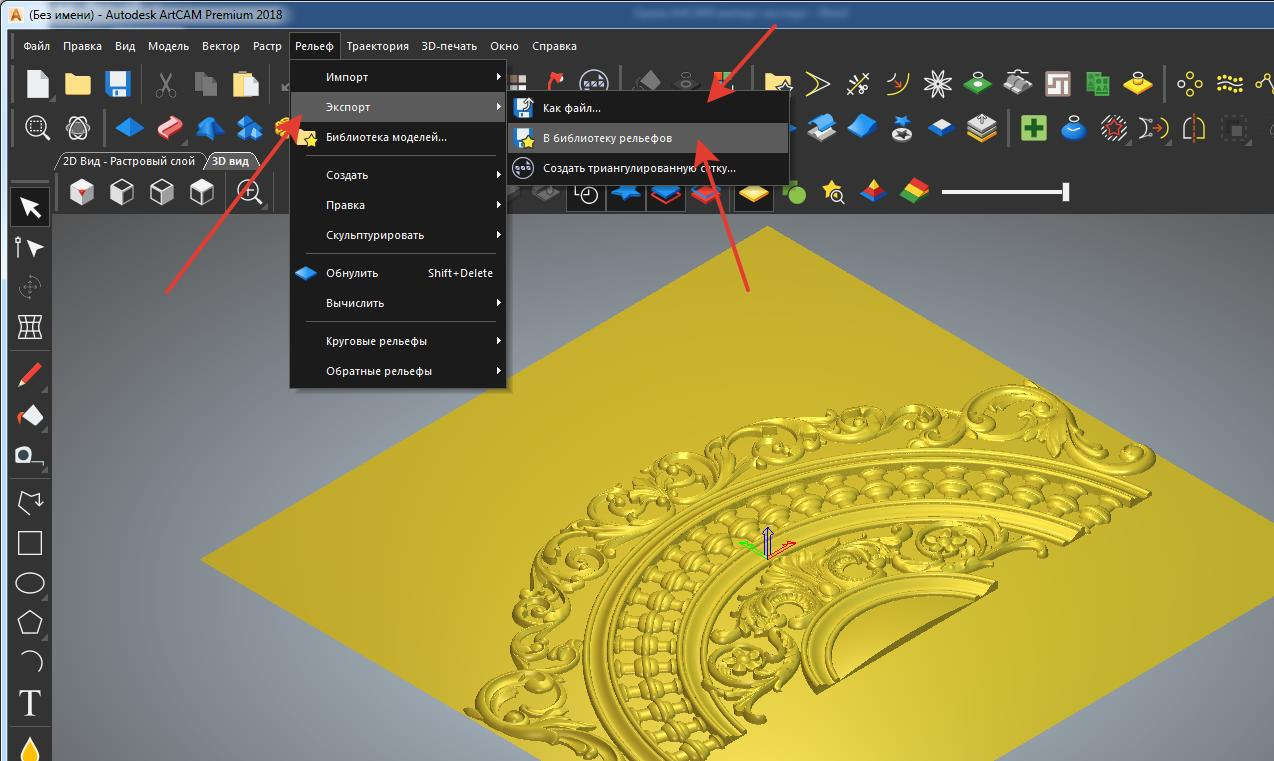 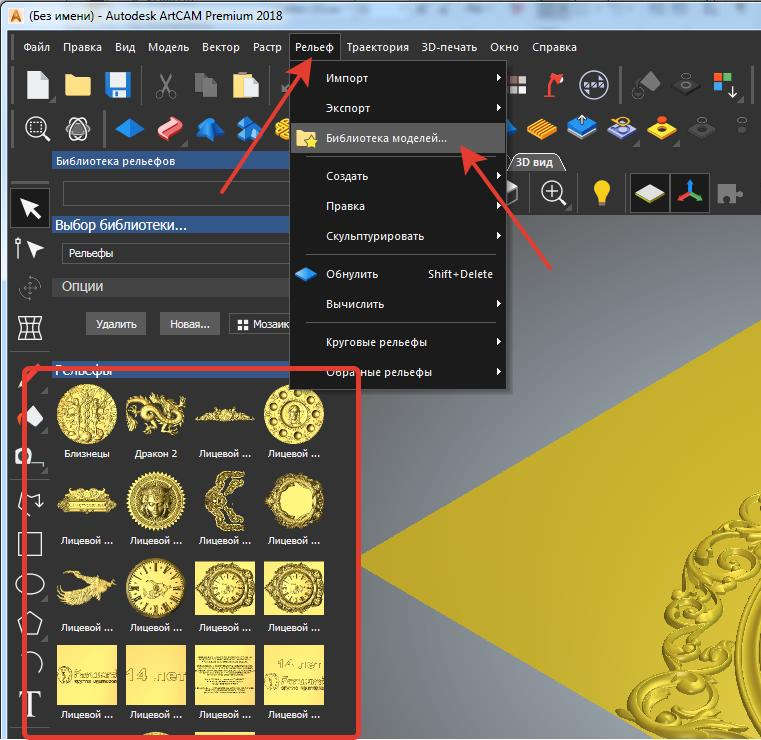 If you don't have base model add-on files installed, this library will obviously be empty. The library itself is located in the directory:

C:\Users\Public\Documents\ArtCAM Files\Reliefs - here you can also create directories yourself for the convenience of working in the program and sort the files as you wish.

In the file library (with add-ons installed) there are also a bunch of additional files, templates, vectors and textures.

(When reinstalling Windows, do not forget to save the "ArtCAM Files" directory. After a new installation of the program, just copy this directory to a new directory on the C drive - all your templates, relief models and other files will be immediately available from the program). 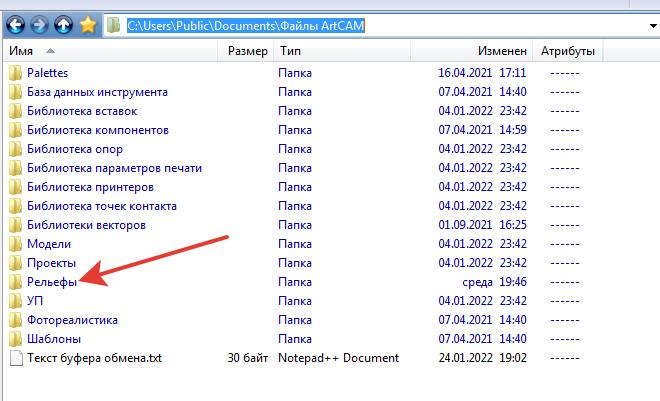 Now for an example, let's save the model in the library -

Let's reset the relief on the main model (that is, in fact, delete it).

Open the library and select the previously saved file 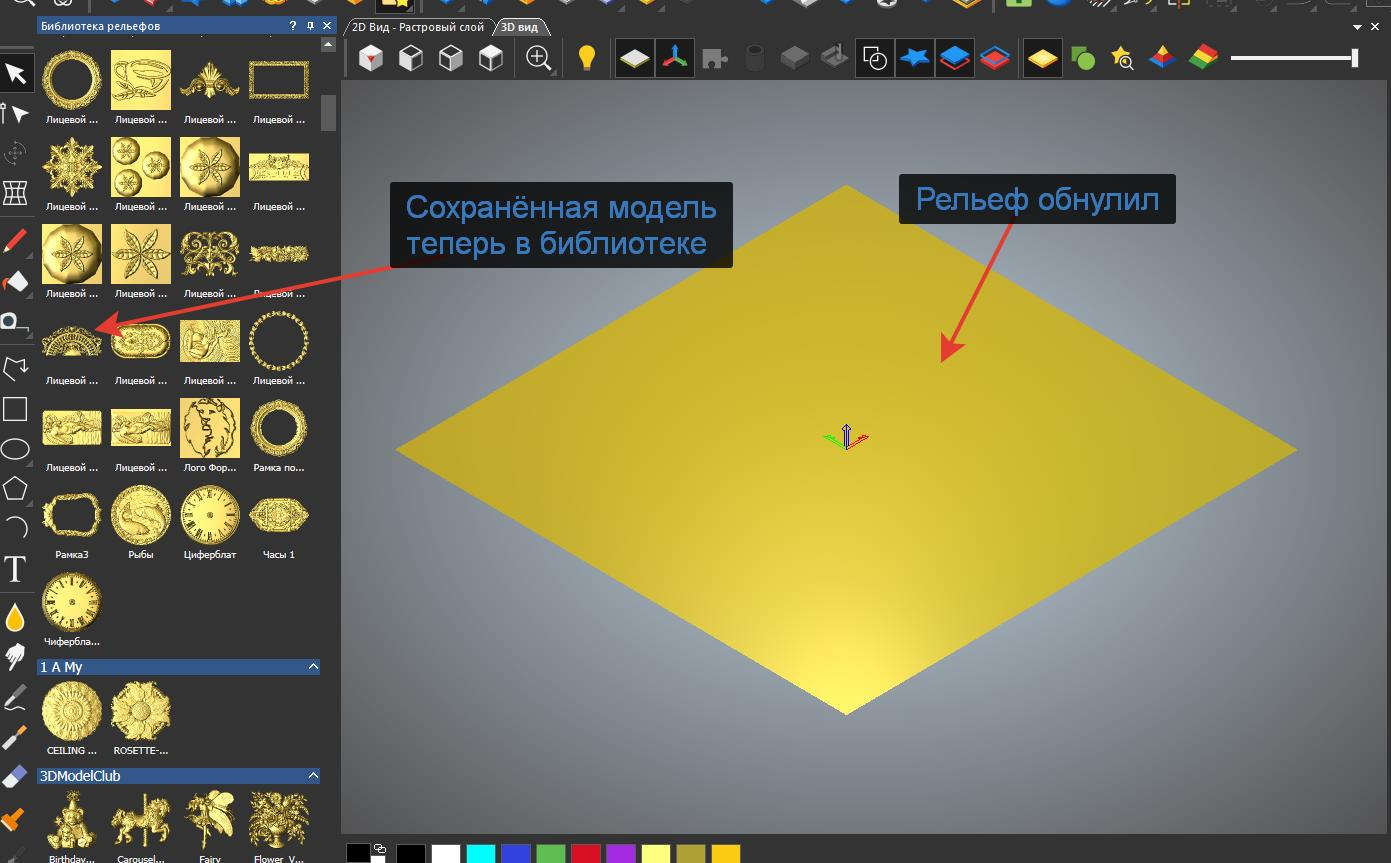 The relief is automatically placed on the surface of an empty model, now it can be changed along 3 axes, increasing or decreasing. By clicking on the lock icon, you can fix the proportions in XYZ or only in XZ, or remove the fixation of proportions altogether. 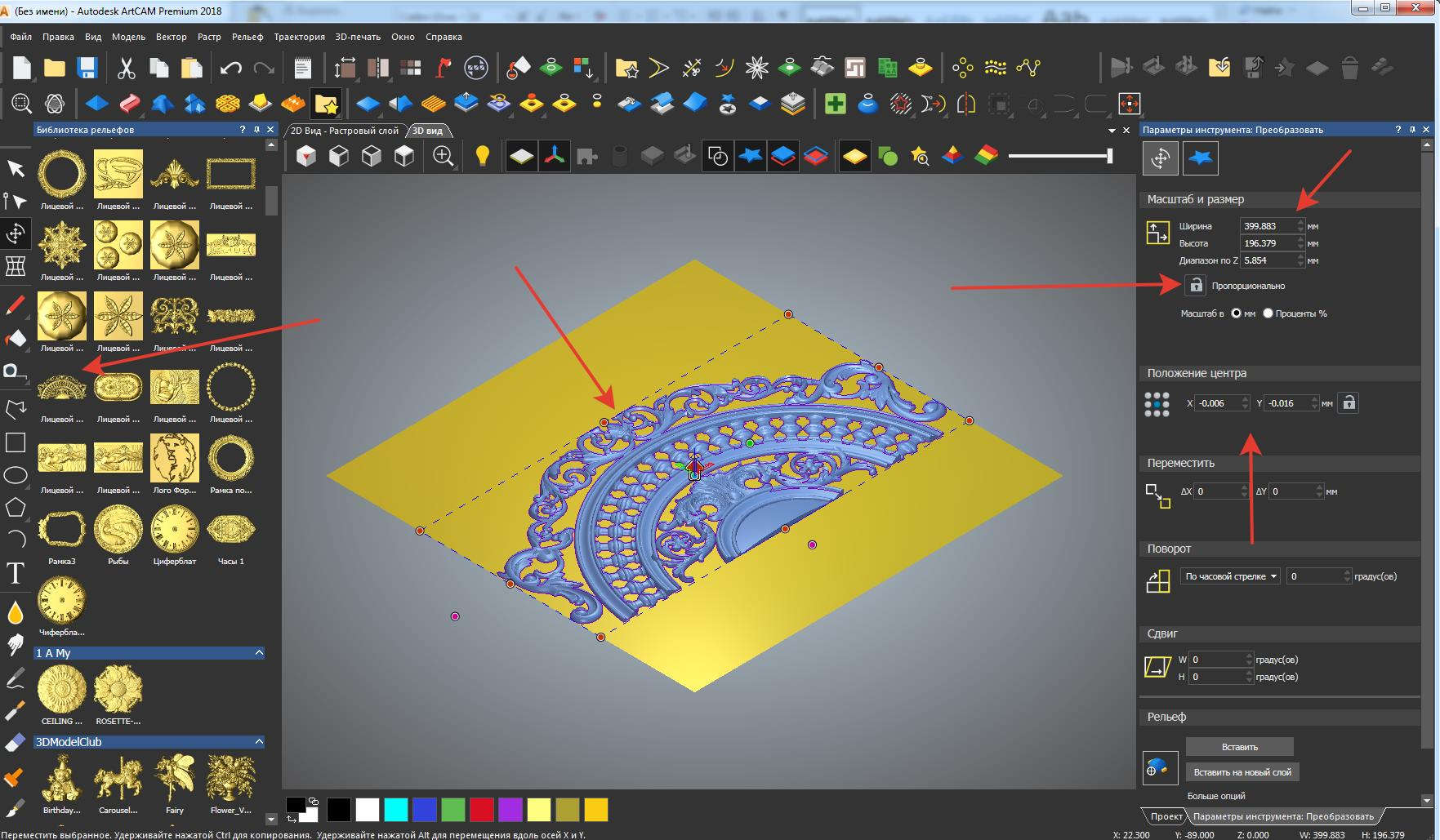 Also, the relief can be changed on the model by stretching or narrowing at the extreme points.

Next, either Insert the relief and it will be fixed as a fixed one, or simply close the current window (the relief will remain editable). Re-editing the relief will be available by clicking on the "Transform" button:

The button below will allow you to deform the model along the XY axes, which can be very convenient, for example, when distributing individual reliefs along the perimeter of an oval frame. 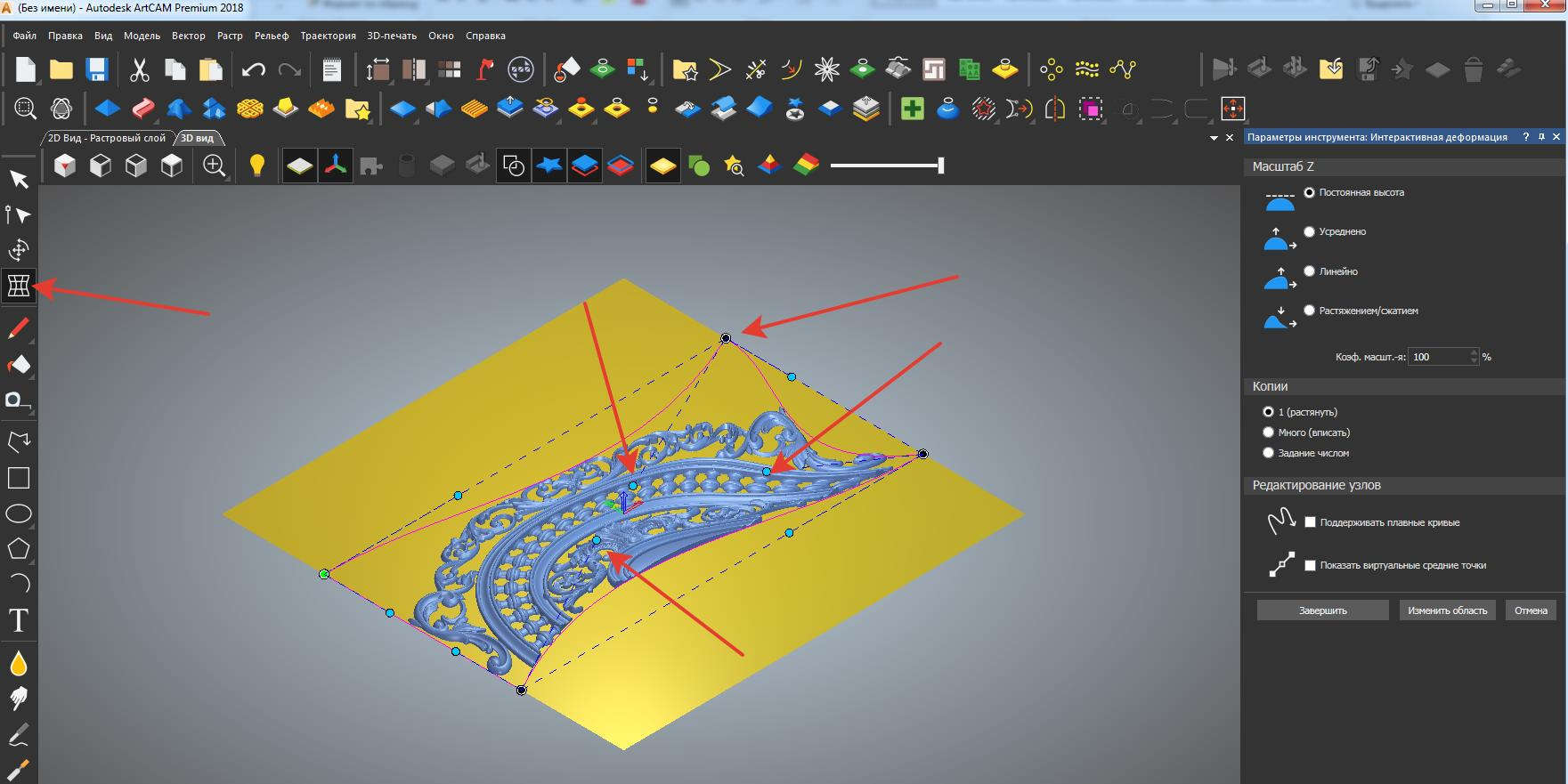 We make the edited relief active again (click on it with the cursor) and again select "Transform" and then "Paste" or "Paste on a new layer" at the bottom right: 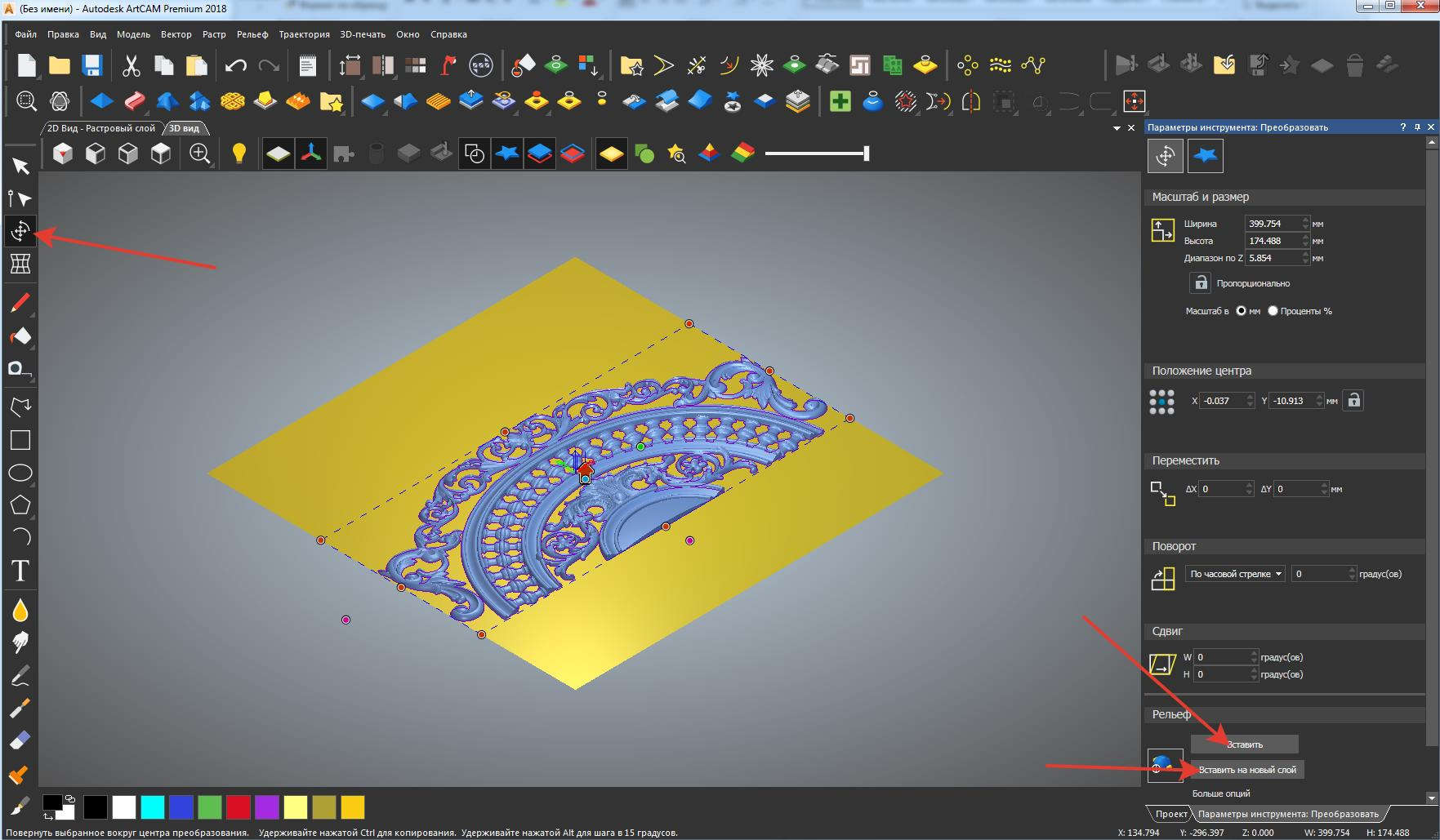 Now the modified terrain can be saved again to the library or as a separate file.

Model conversion from ArtCAM to STL

ArtCAM cannot directly save the model in STL format - the model needs to be converted, that is, to create a triangulated mesh, that is, the same STL.

If everything suits you, save the file in one of the formats. I use mostly standard binary STL, but can be saved to ASCII (text) STL or OBJ. So there are some other formats, but I will not consider these extensions here, since I myself have never used them. 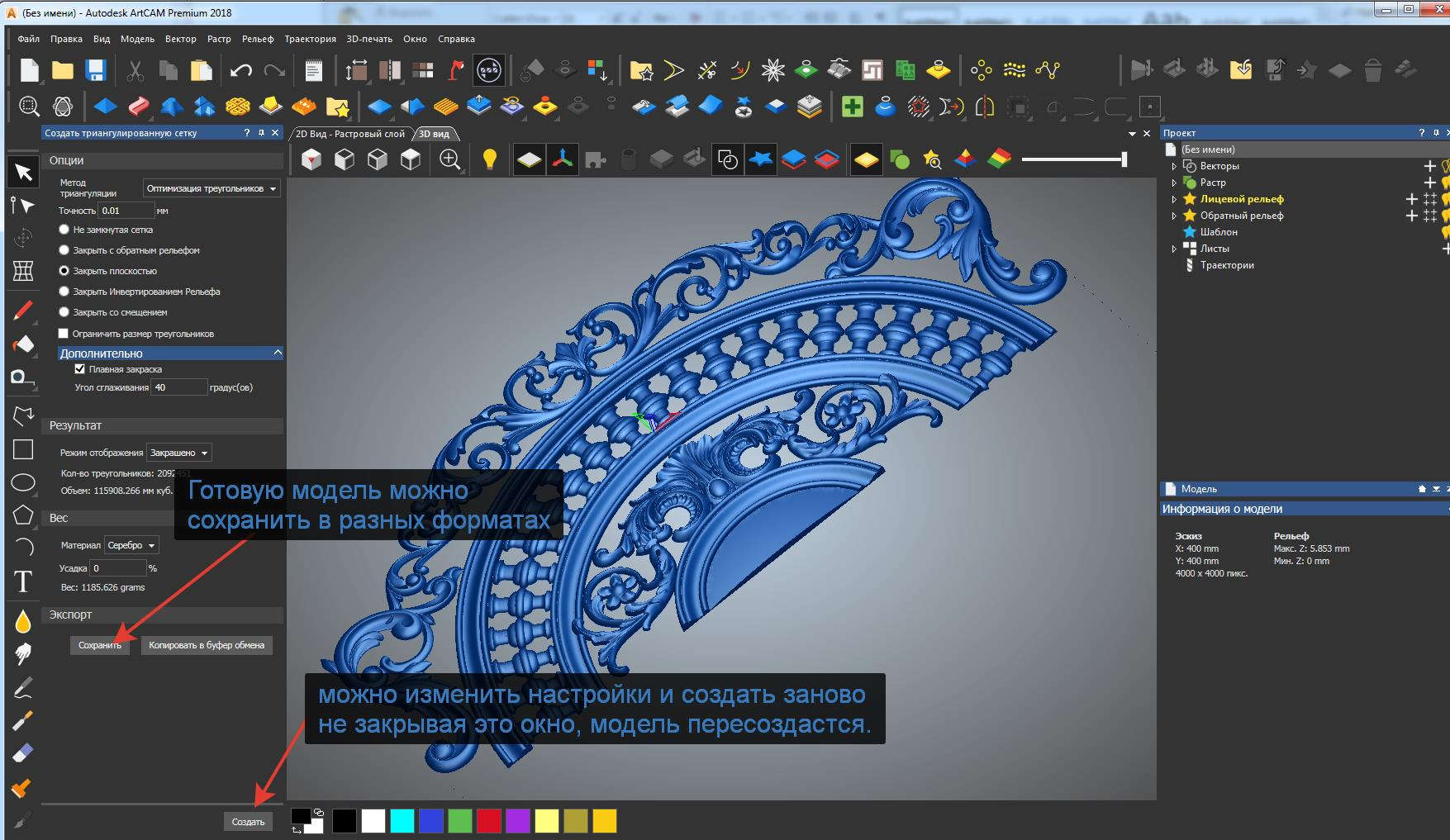 Standard (binary) STL is the best option for me.

ASCII (text) STL - this file will weigh about 1.8 times more than the previous one (I did not see any advantages in it).

OBJ - the file can be opened in most 3D editors. OBJ can also be opened when importing models (similar to STL files). 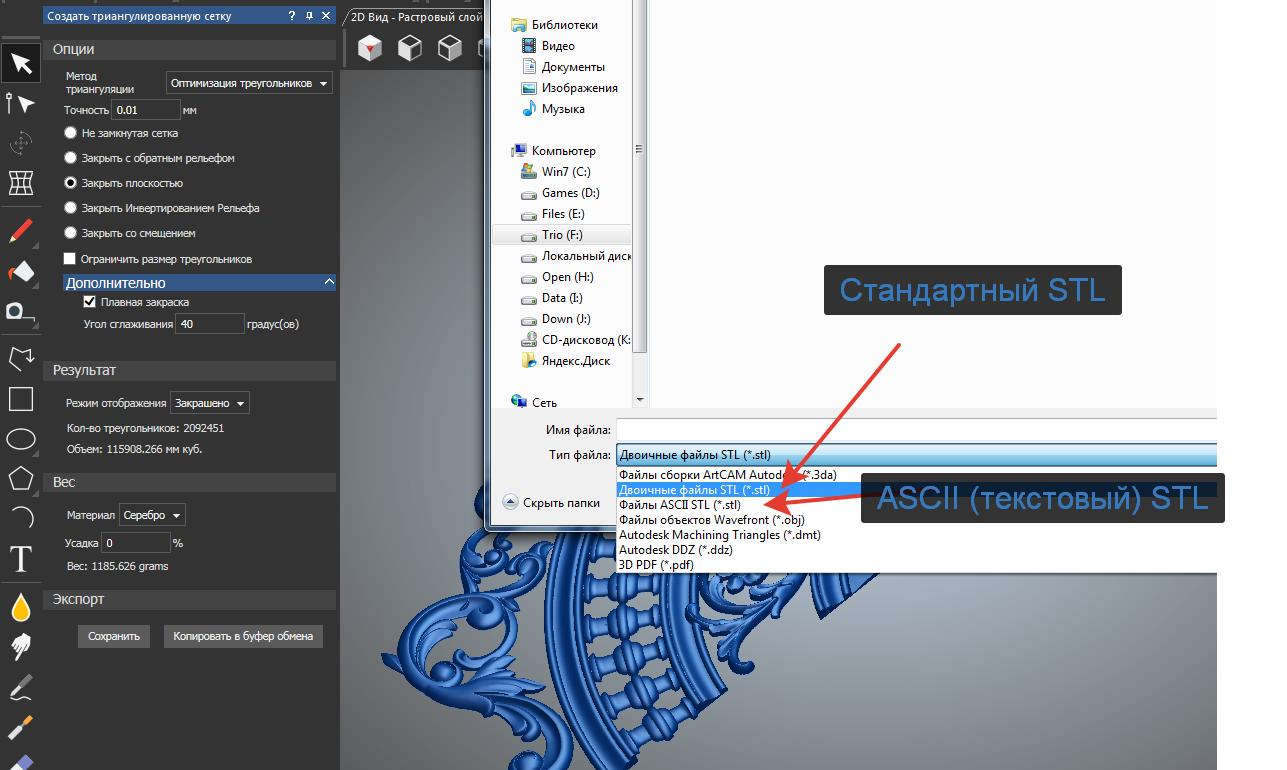 Practically everyone who has worked at least a little in the ArtCAM program knows that to create a relief in the program, you can use grayscale images, or the so-called height maps, grayscale, grayscale, Grayscale. How to search for such pictures and how to raise the relief from them is described in detail in this article on the site.

But is it possible to save the model in this format, that is, save it not as STL but as a grayscale image - yes, of course you can. We return to the model on the main screen (to close the STL model created above, just click on the icon again, or close the window with a cross). 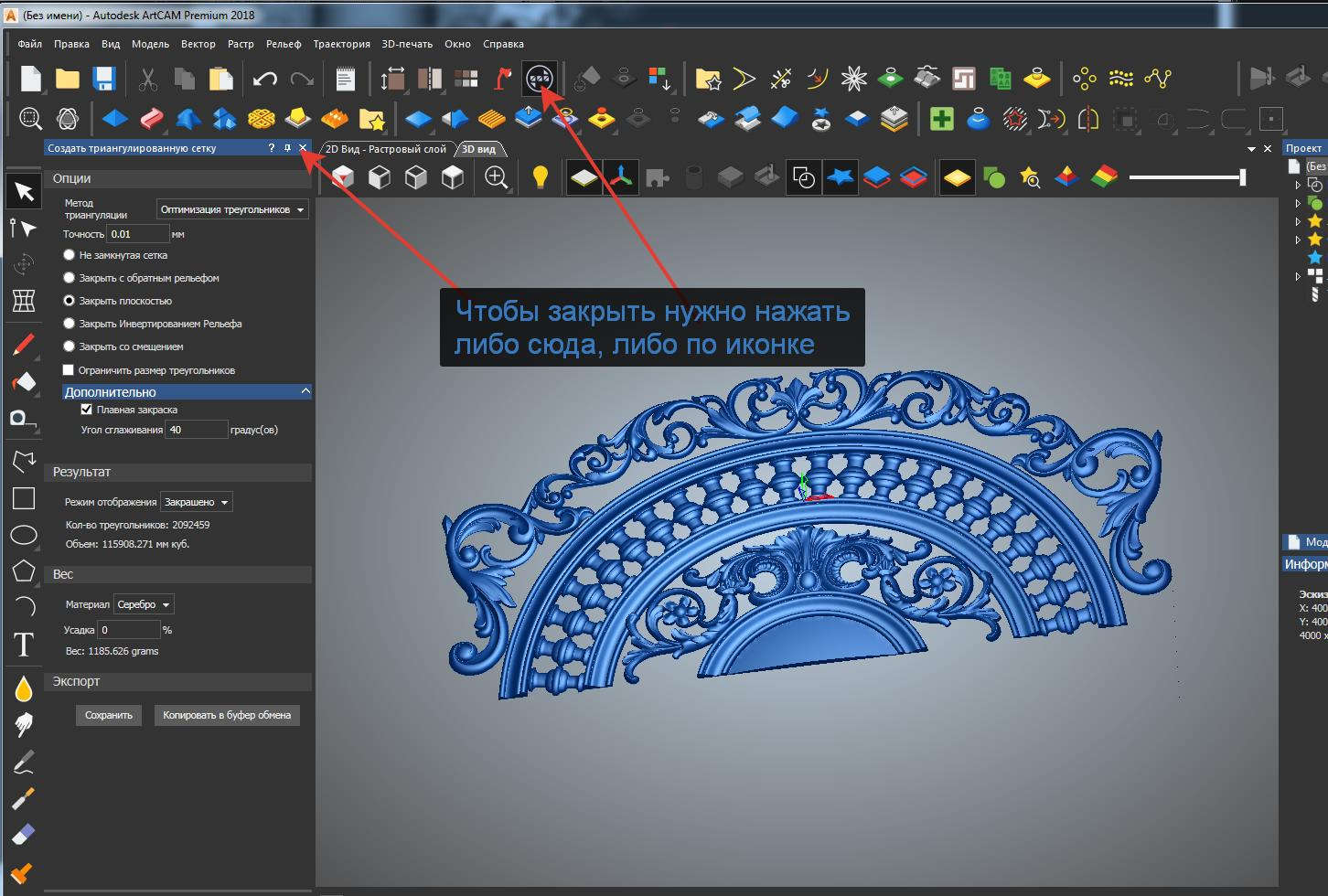 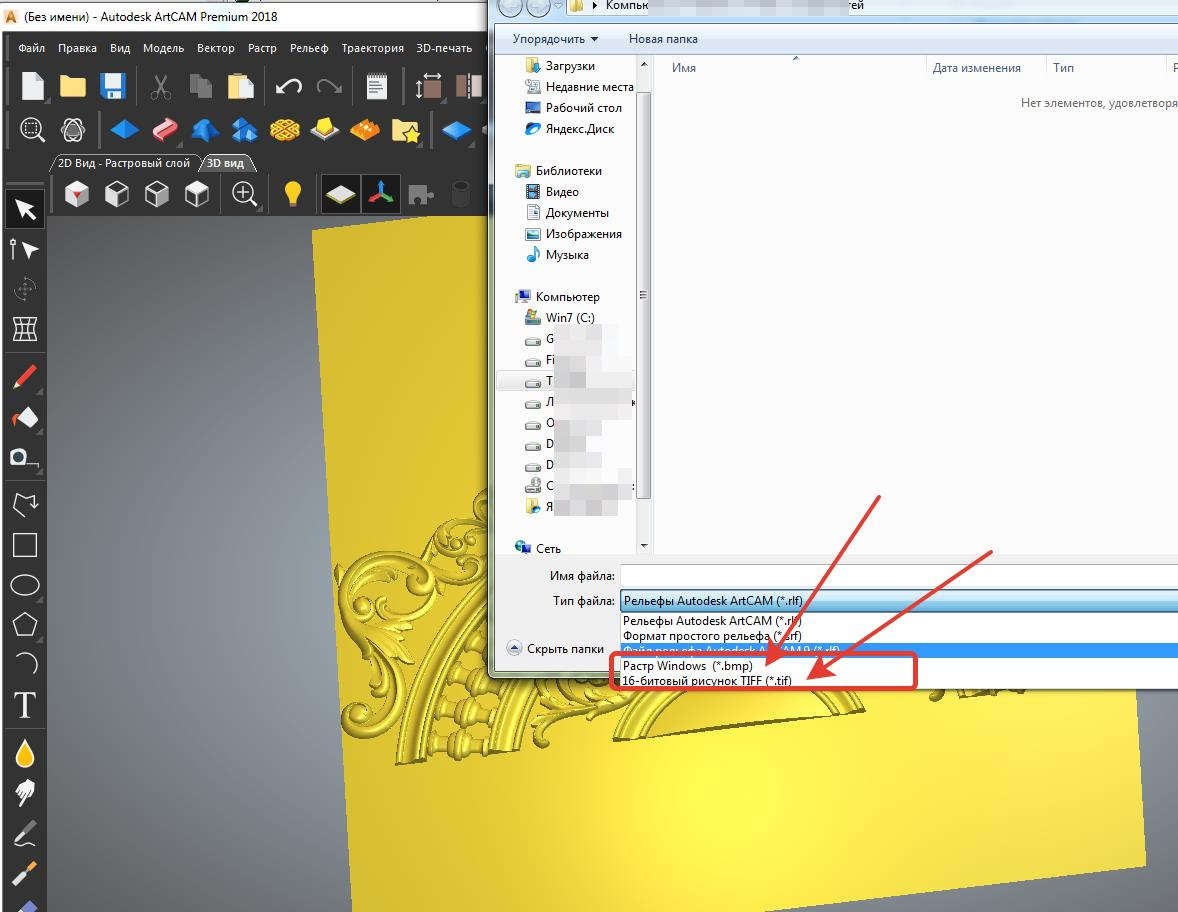 The number of points in both files will be equal to the initially selected resolution, that is, the resolution of the model (in the example, the maximum 4000x4000 is selected).

Amount of files in megabytes when saving (exporting):

The saved file (height map in grayscale) can be edited in any bitmap editor like Photoshop, Gimp, and then raised from it again. How to raise a relief from such pictures is described in detail in this article.

This is the beauty that turns out (below is the screen, the full-size picture has the same resolution as the initial model, that is, 4000x4000 p): 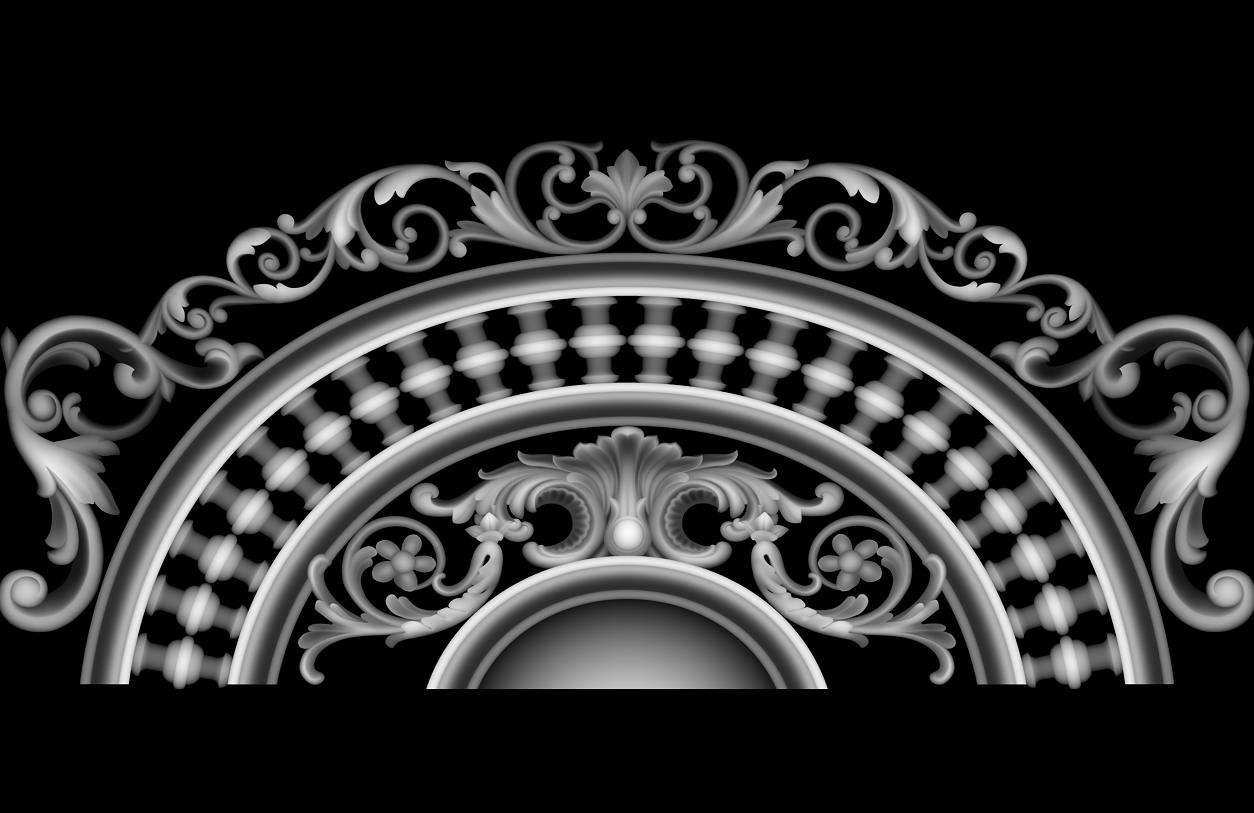 In conclusion, the large size of the loaded models, as well as the selected high initial resolution of the working model, consumes a large amount of RAM, so the program may freeze and sometimes crash on weak computers. In order not to lose data, it is worth saving the model more often. By the way, the program can also crash simply when performing certain actions - keep in mind. Perhaps this is due to the individual settings of the installed Windows, or maybe with software errors.